Not a Victorinox Knife, but interesting nonetheless.
Making an Altoids Survival Tin has been on my wishlist for a long time now. I’ve drawn out several on paper and most of the times I got stuck on the blade.

There isn’t a whole lot of knife you can fit inside an Altoids tin, so basically you’re stuck with razorblades, folding razorblades, small utility knives or folding pocket knives.

I didn’t know who Doug Ritter was before, but apparently he’s an internationally acclaimed authority on survival equipment and practical survival techniques.
Sounds interesting, I need to look this guy up on YouTube.

In the meantime, I have his RSK Mk5 knife laying on my table. This guy designed exactly the knife I was looking for. Take a look here if you want an interesting read about the knife and it’s development.
It’s very small, at first glance to small to use. But let’s not get ahead of ourselves and unpack the knife first. 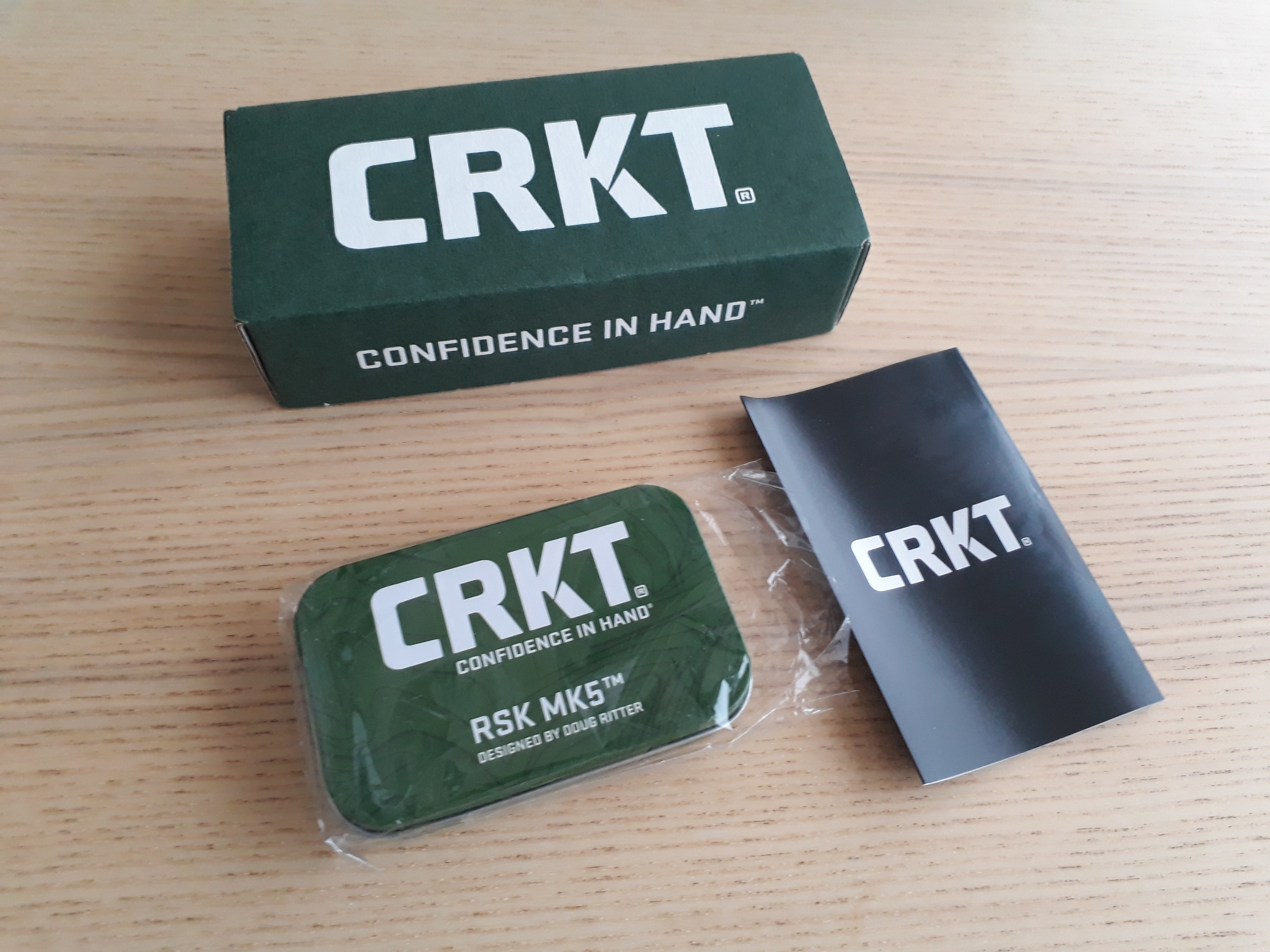 I was greeted with a matte green cardboard box. In it a shiny Altoids sized tin and a leaflet. The tin can be used to build your own survival tin. Knowing me I will keep this tin to store the knife and get an Altoids tin alternative (we don’t have Altoids here in the Netherlands) to build the kit out of. We have Barkleys mints that are a great (and tasty) alternative. I’ve made emergency candles and charcloth makers out of them. 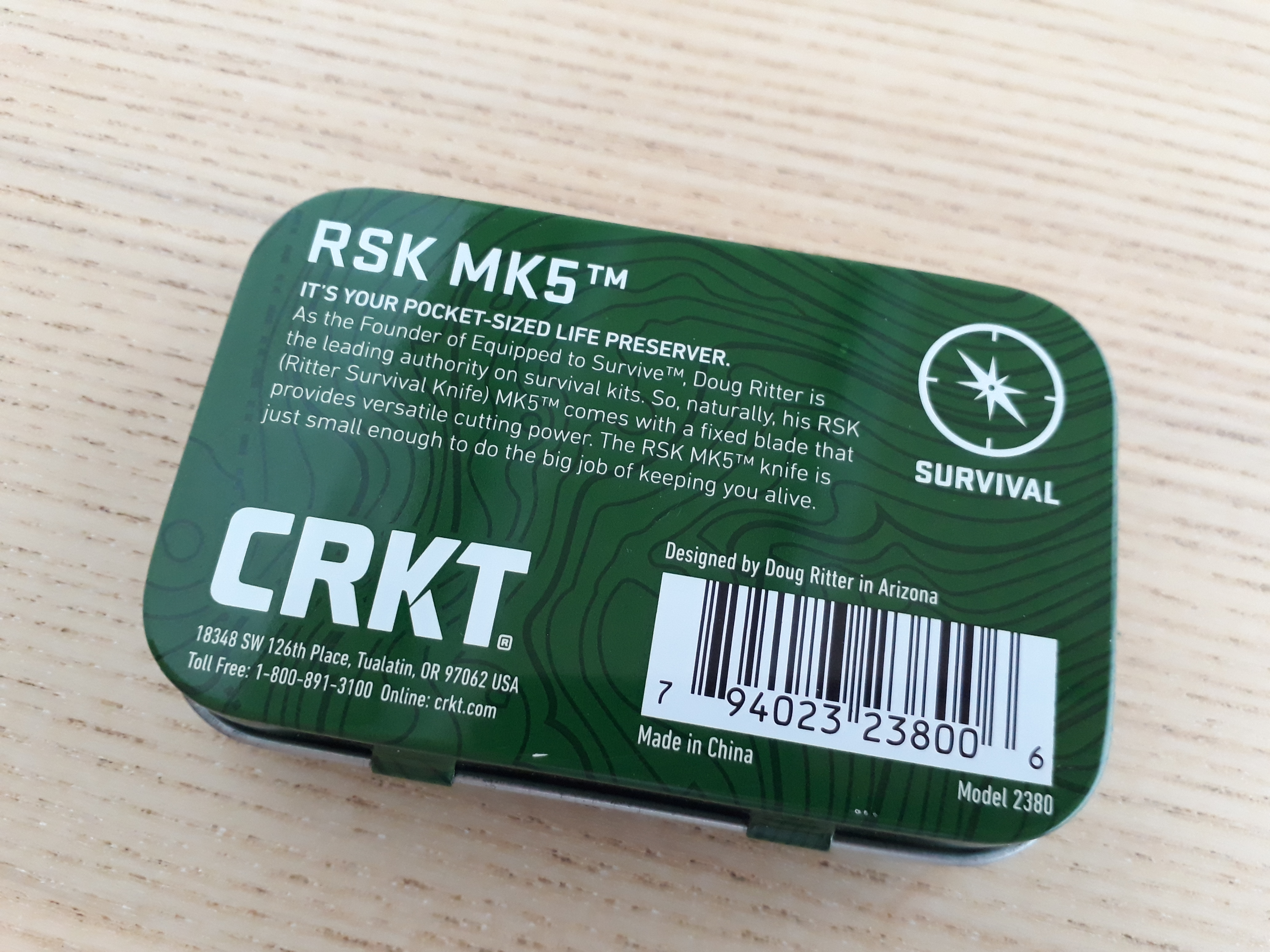 Back to the package at hand and see what’s inside the tin. 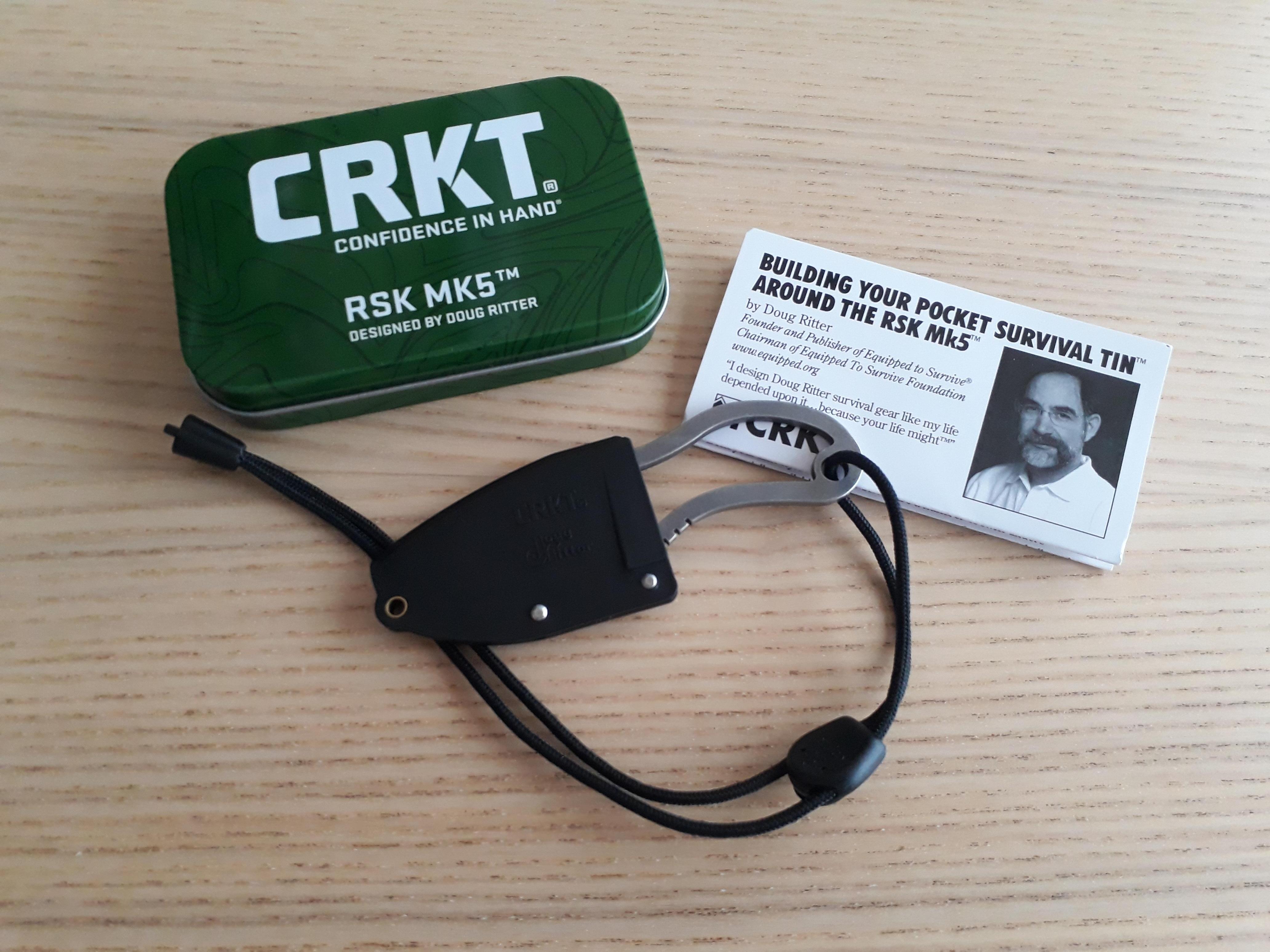 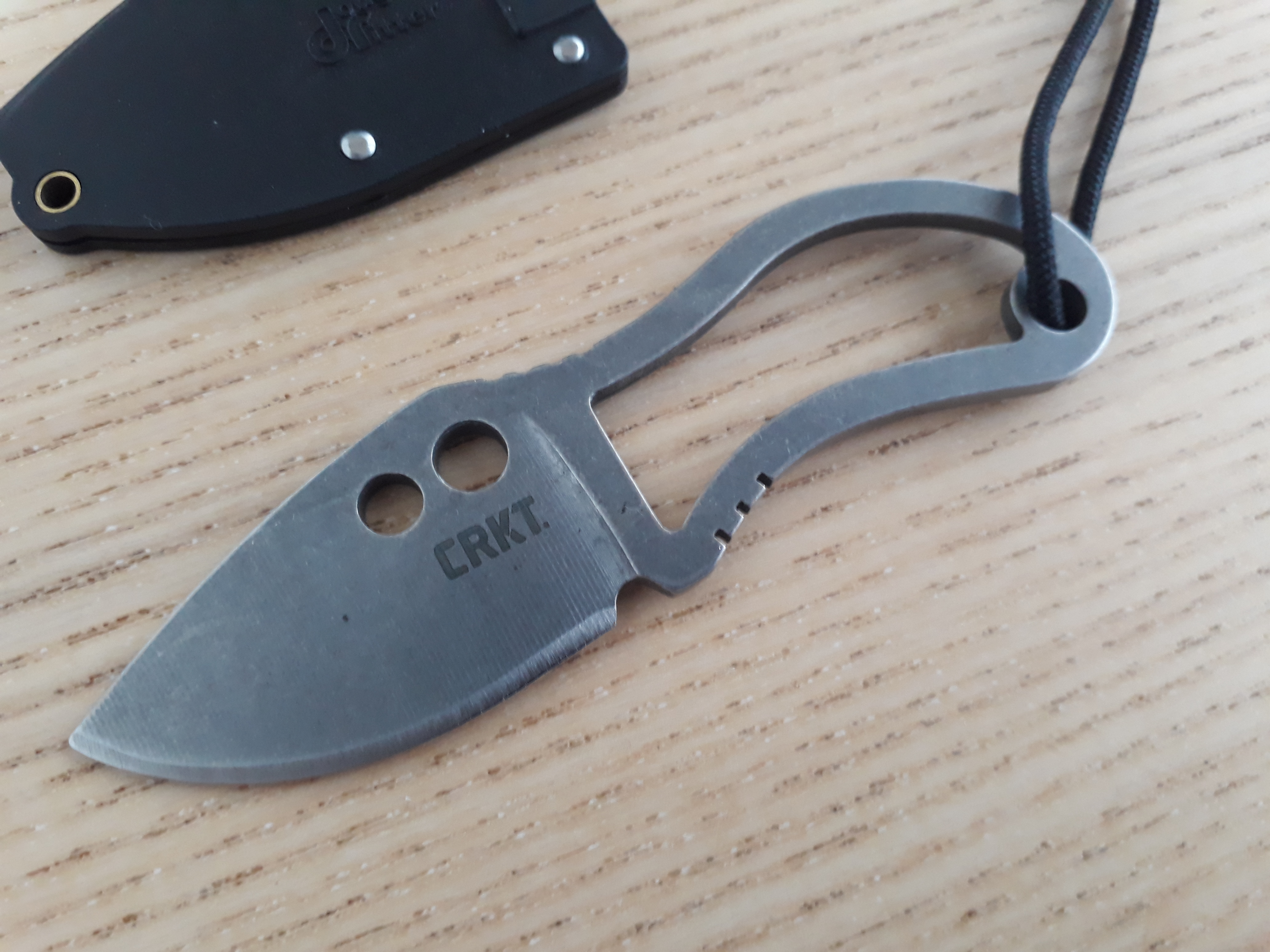 But the star of the show is the knife. As I mentioned earlier it’s really small.
In order to appreciate this knife we have to consider the main use of this knife. It’s a backup blade. It’s not meant for hunting, combat or building a log house. While it’s a fixed blade and you might be able to baton with this tiny knife it’s not it’s intended purpose. However, you can cut rope, sharpen and cut notches into sticks. It can cut fabric or sheet plastic. So in a pinch you can make a shelter with this.

For detailed work there are two holes in the blade. If you pinch down on these, like you would grip a chefs knife, you have a lot of control over the blade and can easily prepare food.

The lanyard is included for a reason. With the black bead you can adjust the length of the loop and give a ‘full hand grip’ of the knife more stability. 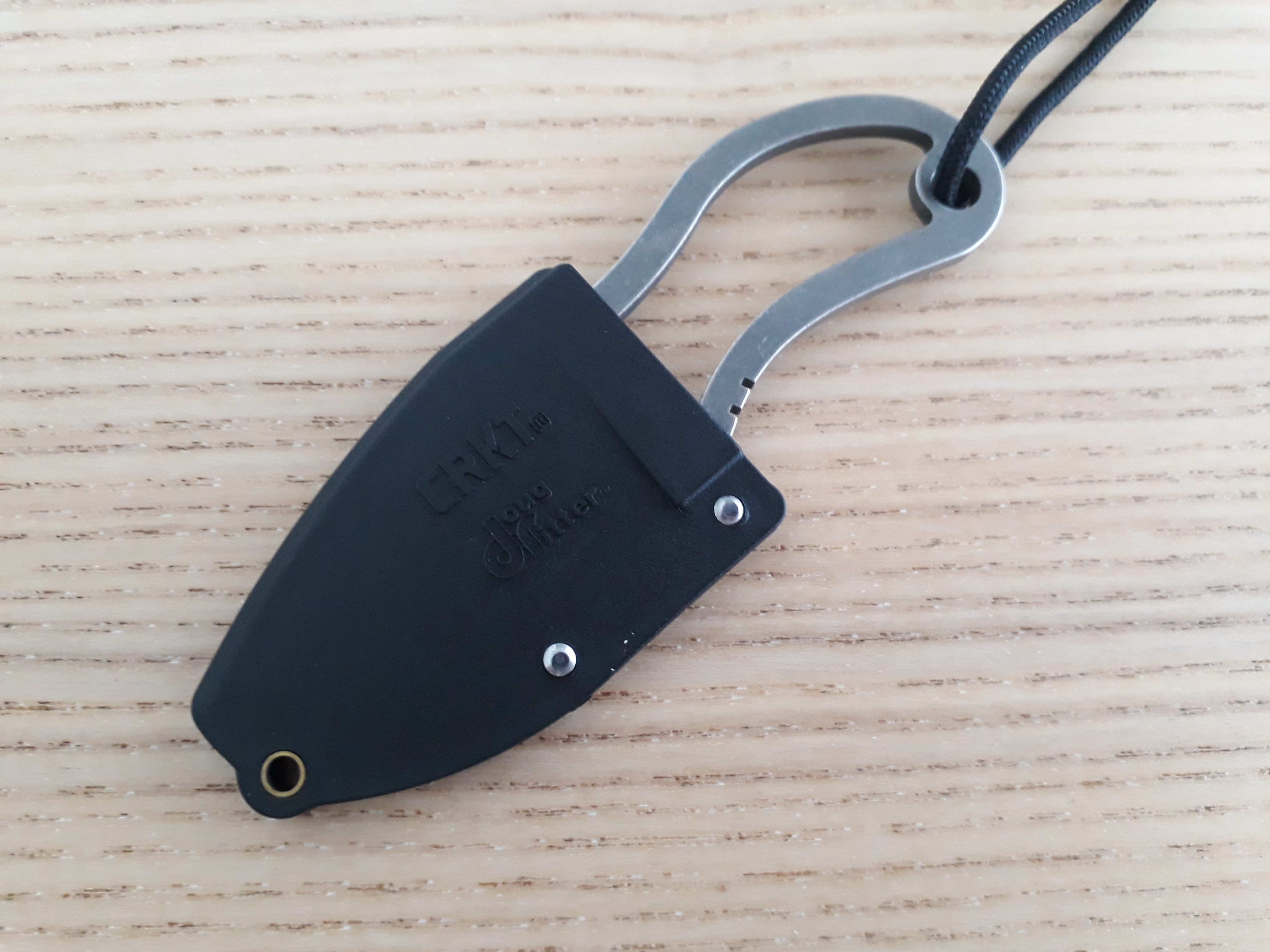 I have mixed feelings about the small sheath. In an Altoids tin you want to keep everything as low profile as you can. The sheath would double the thickness of the package and reduce the pack volume of the tin. If I have the chance, I will include the sheath. For starters it will provide protection to the edge while in the tin. Also, it makes it possible to carry the blade as a neck knife while on the move.
In my opinion the tin is just for transportation. When SHTF and you need to use it’s contents you’d want to take out items like a knife, signal mirror, light and whistle. Because you nééd these items immediately when the opportunity presents itself. It’s probably preferable to attach a breakaway lanyard to the sheath to carry it under a shirt.

To give you an idea of the size of the knife I put it alongside a 91mm ‘standard’ Swiss Army Knife. For a long time I thought about including a small SAK in the kit, but the trade-off with a fixed blade is just to big. Given the fact that I carry a 91mm SAK all the time and the RSK Mk5 is backup blade I think the RSK Mk5 is the better choice. 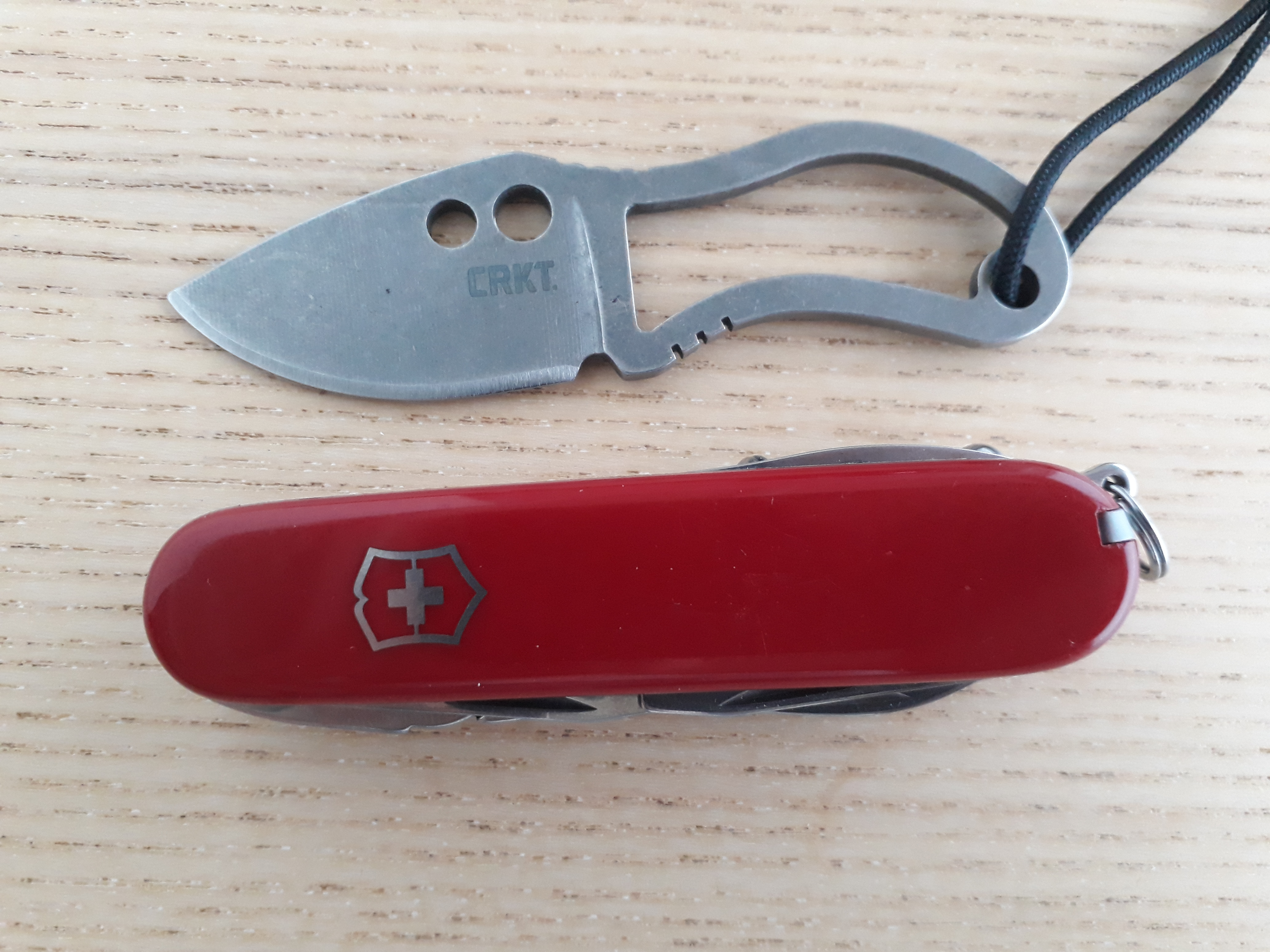 So, how does it fit in a tin? Diagonally. It makes sense as it maximizes the length available. It’s a comfortable fit, but does take up a lot of space.
If you choose to leave the sheath at home you can tape off the edge of the blade to protect it. However, you need to carry it in the tin should you need it. 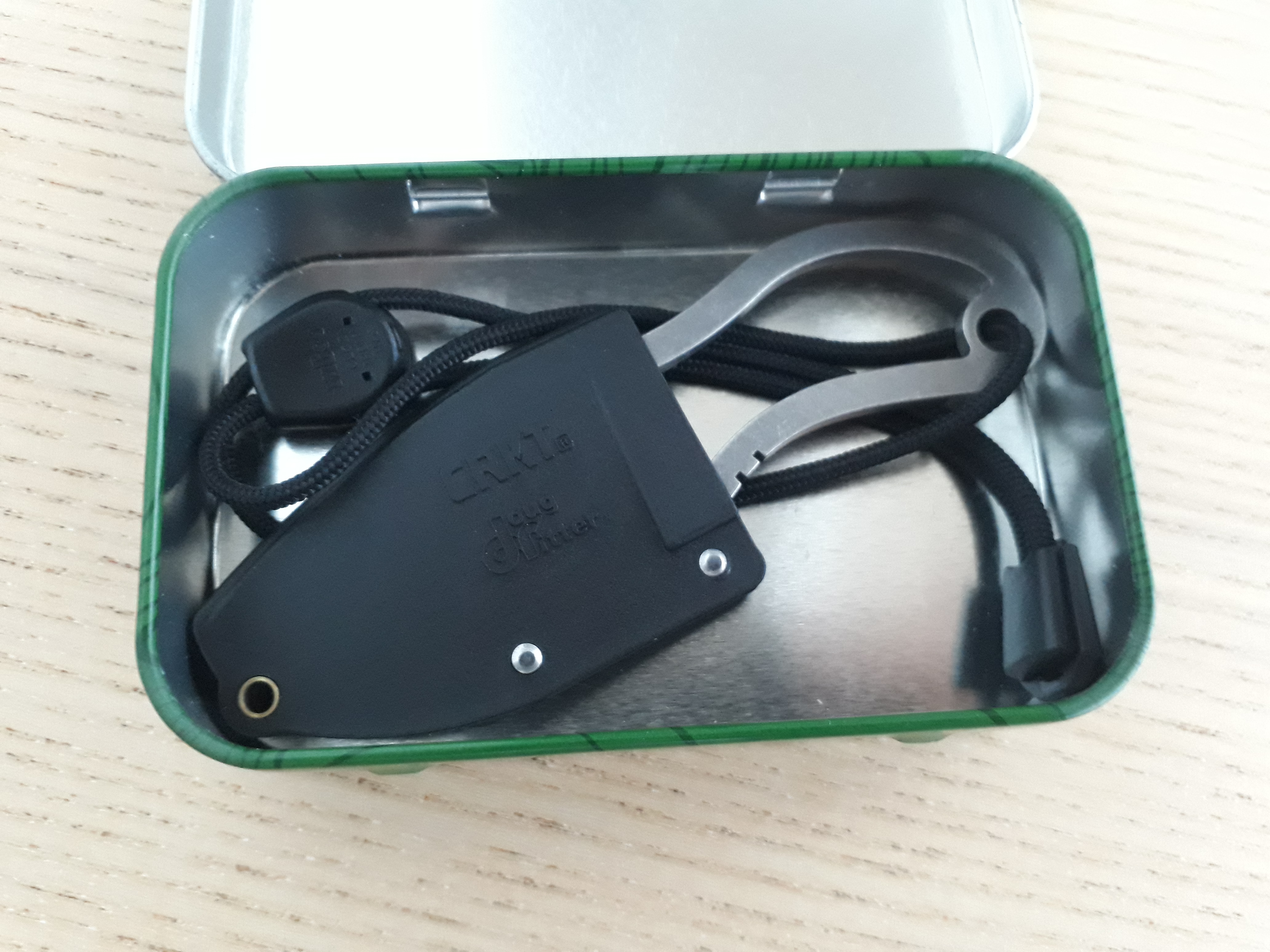 Ideally I’d have a small pouch around the tin. When you need to use it you transfer all the contents to the pouch, and have the tin available for boiling water.

All in all this is a very practical small blade that fit’s my needs perfectly.
Because it’s so small and it has a very nice sheath I’m considering a second one to hang in my backpak. Perhaps on a next order I will add one.